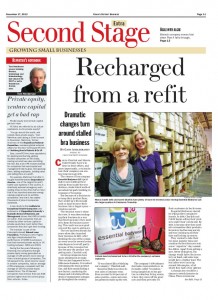 Carrie Charlick and Marcia Cubitt finally have windows in their offices, and more importantly, a vision for how their company can sustain long-term growth.

The owners of bra company Essential Bodywear LLC spent eight years building their startup from inside the windowless, cinder-block walls of an industrial park building in Commerce Township.

But because of a decision to revamp their product lines, they ended up with enough cash on hand to move their business into a bigger space — windows and all.

The decision wasn’t about the view. It was about reshaping their business in a way that freed up money they needed to keep the business growing. The result was new products and the cash to add more.

The two had been friends for years when they launched their business in 2003. After doubling the size of the company every year for several years, sales began to level off, partly because of the recession but also because the product was getting stale, Charlick said.

Growing companies have many adjustments to make. This one just happened to be a little more dramatic. It involved redesigning the main product line, and that meant finding a new factory, marketing the change and retraining of hundreds of independent salespeople throughout the country.

“It was almost like rebirthing our company,” Charlick said.

Essential Bodywear does direct sales of intimate wear. Bras account for 80 percent of sales; panties, camis and similar garments make up the rest.

The company’s 400 independent sales representatives, informally called “bra ladies,” bring sample kits to bra parties in suburban living rooms, where they show off the products and then privately fit their customers in back rooms.

Essential Bodywear started by selling other companies’ brands. In 2006, Charlick and Cubitt began selling their products under their own brand. By 2010, it became clear they needed to streamline their products. Inventory had become unruly and was sucking up all their time and locking up money.

They wanted to take their two most popular lines and combine the best features into a new “superbra” they named the Abbie. Apart from getting a new, better-fitting bra, the change would halve the inventory on hand, and sales reps would have a lighter load. The bra ladies were carrying around 180 samples, all of which they had to buy upfront.

A change also would be a chance to switch factories in China. Their current one wouldn’t budge on its minimum volume per order, forcing Essential Bodywear to stack orders. That took six months and led to regular product shortages.

They hired a consultant who had wide connections in the fashion industry and spoke Mandarin. The consultant found a factory that would take a far lower minimum batch order. She also found designers to help with the new bra.

But the work wasn’t over. Between selling off the old lines and getting the new one, moving was an anxious six-month period of dealing with two sets of inventory. To reach the end of the glut, Charlick and Cubitt had to heavily discount its old lines and stuff product in the rafters, literally. The spaces above their offices were filled with bras and panties, Cubitt said.

“It took momentum out of the sales force. We knew that was going to be an issue, but we knew it was a gamble worth taking,” Charlick said.

But the 100 diehards ended up with more manageable kits of about 60 samples and a system that could continually introduce fresh product. The Abbie was designed for better fit, but also to allow Essential Bodywear to base new styles on the new bra instead of doing a full redesign for each new product.

Just after the switch, the company launched a black lace bra. Reps brought one sample of the new style to parties, and then used their Abbie samples to fit customers.

“They flew through (the lace bras) in two and half months,” Cubitt said.

The glut diminished, and the sales staff shortage was alleviated when a Family Circle article came out in September 2011, after the change was in full swing. The article featured a Chicago mom who was making $69,000 a year selling Essential Bodywear bras.

“That was our saving grace. It brought us in our new people that we needed,” Charlick said.

“It’s often a very painful experience for them to have to go through. It’s excruciating for them. There’s not a lot of help in the store,” Cubitt said. “Women are hard on themselves.”

For getting the right fit, a party among friends is better than a mall, where trained specialists are rare and open discussion is uncomfortable, the owners say.

Laura Rose, a hairdresser who works with fashion designers, said the bra-shopping experience is a miserable one. A Saturday at the mall means entering trashed dressing rooms, dodging strollers and once in a while looking down at a little boy whose mom brought him into the dressing area. Meanwhile, there are piles of bras and no help in finding the right one.

“You’re still paying $80 for this basic apparatus that doesn’t fit that well, but you feel that you don’t have any choice, because you really don’t,” Rose said.

Rebecca Aughton, owner of Bravo Intimates in Royal Oak, said she used to carry sleepwear and camis but stopped because she was making so much money on bras. She now carries only bras. She said her business sees double-digit growth because retail chains ignore bra service.

The Essential Bodywear owners said much of what they do is about educating. Women who spend lots of money on outfits will ignore what’s underneath. They don’t know they shouldn’t put bras in the dryer or wear the same bra every day, or wear them well past the bra’s better days.

“I’ve had people come in who have been to Essential Bodywear parties, and they’re wearing the wrong size,” Aughton said. “Some women who are large-breasted might be self-conscious. They certainly aren’t going to go to a party.”

But the company’s emphasis on fit does put it ahead of most stores, Aughton said.

Charlick said customers, regardless of where they shop, often need a refit. She has directed people to independent boutique stores such as Bravo when customers are having an especially difficult time getting the right fit.

“If someone wants to get a professional fit, the mall is not the right place,” she said.

Millie Heinz from Haslett is one of Essential Bodywear’s more prolific bra ladies. She holds up to five parties a week. She asks the attendees if they like shopping for bras. One in 100 say they do.

About 85 percent of women wear the wrong bra, she said. Some are apprehensive about the parties at first, but they come around when they see the results.

“They can look like they lost 10 to 15 pounds just by being in the right bra,” Heinz said.

Trisha Remchuk lives in Webberville and went to one Essential Bodywear party about four years ago. She liked the fit so much she hasn’t stopped reordering since, despite the higher price. The Abbie sells for $69. Bravo Intimates sells bras for similar prices, while bras at a Walmart can be less than $10. Victoria’s Secret bras have a wide range, especially when discount sales are taken into account.

“I have even gone out since I first purchased one, thinking I’ll go grab something else because (the Essential Bodywear bras) are rather expensive. But I never even purchase,” Remchuk said.

The product line switchover took a year and a half. The consultant was the biggest expense, and at about $120,000 “was worth every penny,” Charlick said.

Essential Bodywear had revenue of $4 million in 2010 and $4.3 million in 2011. Charlick and Cubitt expect to be at $4.5 million this year. Where profits were “minimal” in the years before the switch, this year the company is on track for a 12 percent profit margin, Charlick said.

The owners now have the money and time to grow their company. They used the extra money to move from their old 3,500-square-foot headquarters to an 11,000-square-foot space, still in Commerce Township.

Since the switchover, Essential Bodywear has added four new bra styles, more garments and a line for nursing moms. And there were no shortages this year.

“The lower you keep inventory — if sales stay equal or you increase them — that converts to cash,” Rice said.

Charlick and Cubitt plan to grow revenue by 10 percent to 15 percent annually. Their next move is to expand deeper into the East Coast, Southeast, Texas and California. They also plan to launch more styles, expand into swimwear and add more sleepwear.

What if they hadn’t made the decision?

“I don’t want to think about where that would have taken us,” Charlick said.