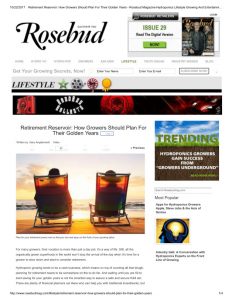 For many growers, their vocation is more than just a day job; it’s a way of life. Still, all the organically grown superfoods in the world won’t stop the arrival of the day when it’s time for a grower to slow down and start to consider retirement.

Hydroponic growing tends to be a cash business, which means on top of counting all that dough, planning for retirement needs to be somewhere on the to-do list. And waiting until you are 50 to start saving for your golden years is not the smartest way to assure a safe and secure third act. There are plenty of financial planners out there who can help you with traditional investments, but if growers understand one thing, it’s that trusting the system is a sure way to get screwed in the long run.

To get some thoughts on renegade retirement investments, we first spoke to Floy Lilley, an associate scholar from the Alabama-based Ludwig von Mises Institute, an ultra-libertarian economic think tank that doesn’t mind sharing ideas for surviving economic collapse. Whether or not the world ends, these folks’ off-center investment ideas are great for anyone thriving in a cash business.

One of the institute’s suggestions is investing in precious metals and gems because they don’t require much paperwork and are easy to get into. Diamonds are particularly handy because they are small and non-metallic.

“Diamonds don’t set off any alarms,” says Lilley. Pre-1965 bags of coins are also good finds, she explains, because those coins have silver in them.

Lilley also relayed the story of one serious investor who visits banks to exchange $20 bills for nickels. The nickel is the only U.S. coin left that has any valuable metal in it — copper and nickel. She says the guy fills sections of PVC pipe with the nickels and buries them. He figures that even if someone happens to find the pipe, the digger will think it’s just a regular old water pipe.

There are all sorts of objects a person can buy that increase in value over time. Just watch Pawn Stars. The IRS prohibits antiques, art, gems and metals from being added to a retirement account, but that just means there’s no special tax deferment benefit for these things, as there is when stuffing money into a 401(k) over the years. A person can still buy hard assets with the intention of building a retirement nest egg.

The problem with these sorts of tactics is the amount of effort they require. Do you really want, as a serious alternative for saving for retirement, to huff around antiquing, attending art auctions and burying nickels? A safe portfolio is a diverse one, which means including some traditional investment opportunities.

Lawyers and accountants with inside perspectives on these matters recommend declaring all income at tax time. Once declared, it won’t get you in any more or less trouble to put some of that money into traditional retirement accounts. The IRS doesn’t worry about people who pay their taxes; it’s the ones who don’t that get its attention.

Dave Hammel, a Michigan-based forensic accountant, believes that people assume too much about government operations. “The IRS doesn’t care if you’re a prostitute. Put it on your Schedule C,” he proclaims.

Randy Daar, a California-based lawyer, explains that declaring taxable income gets sticky when it comes to disparities between state and federal law, especially for deductions on income related to growing. But consider the risk of not paying taxes at all versus screwing up some deductions, and the choice is clear. Al Capone would agree.

It’s also a hassle worrying about dragging family members into the mess, moving money around and looking over your shoulder. Bullion dealers are required to get a social security number from anyone purchasing more than $15,000 worth of gold, Daar notes. The “least onerous” path, according to Daar, is to declare income.

And now for the disclaimer:

If a money trail is still what you’re most concerned about, you have bigger issues than retirement. “You can’t live in two worlds at once,” Daar says. If you want to play with gold and expensive art off the books, you’ll have to find others willing to participate.