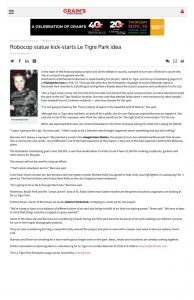 In the wake of the Robocop statue project and all the debate it caused, a project to turn one of Detroit’s vacant lots into an art park has gained new life.

Hamtramck artist Marianne Burrows is spearheading the project, called Le Tigre, and set up a fundraising page for it at Kickstarter.com on Feb. 16. That was the same day the Kickstarter campaign to build a Robocop statue in Roosevelt Park reached its $50,000 goal and ignited a debate about the statue’s purpose and symbolism for the city.

The Le Tigre name comes not from the feminist indie rock band of the same name but from an initial attempt to build the park at the old Tiger Stadium location. Burrows said that attempt failed when it met resistance by other people — from baseball fans to Corktown residents — who have dreams for the spot.

“I’m not going to beat my fist. There’s plenty of space in the beautiful land of Detroit,” she said.

Although the Le Tigre idea had been on and off for a while, the din over Robocop inspired Burrows to reignite it. She said she is one of the naysayers who think the statue would not be “the right kind of commentary” for the city.

When she expressed that view, she received blowback in the form of people asking her what she is doing for Detroit.

“I wasn’t going to let it go,” Burrows said. “I didn’t want to be a Detroiter who thought negatively about something and just did nothing.”

The Kickstarter fundraising goal is also $50,000, a sum that would allow 25 artists to each have $2,000 for creating sculptures, gardens and other pieces for the park.

The money will not be used for cleanup efforts.

“That’s what volunteers are for,” Burrows said.

A site hasn’t been chosen yet, but Burrows said real estate investor Michael Kelly has agreed to help. Kelly was highlighted in a sweeping Feb. 3 piece by The Detroit News, which described Kelly as the city’s largest private landowner.

“He’s going to let us do it if we get the funds,” Burrows said.

Rivertown, Brush Park and the “urban prairie” area of St. Aubin Street near Eastern Market are the general locations organizers are looking at for Le Tigre Park.

“We’re trying to have a nice balance of different pieces of art and also being mindful of art that has staying power,” Diven said. “We have to bear in mind that things could be scrapped or spray-painted.”

Some of the ideas she and Burrows are considering include having all of the park benches be pieces of art and installing surveillance cameras for use in time-lapse photography projects.

They are also considering forming a nonprofit entity around the project and plan to meet with a lawyer next week to discuss options, Diven said.

Burrows and Diven are shooting for a two-month goal to begin work on the park. Ideas, artists and volunteers are already coming together.

The Le Tigre Park Kickstarter page can be reached by clicking here.