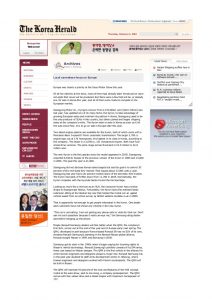 But Ssangyong’s Kyron already not doing so well at home: “Don’t ask me such questions because it really annoys me,” says one frustrated dealer before hanging up the phone.

Europe was clearly a priority at the Seoul Motor Show this year.

Of all the vehicles at the show, most of them had already been introduced or were concepts that never will be produced. But there were a few that will be, or already are, for sale in Korea this year, and all of them were made to compete in the European market.

Ssangyong Motor Co., trying to recover from a 196 billion won ($210 million) loss last year, has updated one of its many SUVs, the Kyron, to take advantage of growing European sales and maintain its position in Korea. Ssangyong used to be the only producer of SUVs in the country, but others joined and began chipping away at the company’s niche.

The Kyron went on sale in Korea as soon as it hit the auto show floor. It is to go on sale in Europe later this year. Two diesel engine options are available for the Kyron, both of which come with a Mercedes-Benz 5-speed E-Tronic automatic transmission. The larger 2,700 cc engine tops out at 176 horsepower, the highest in its class in Korea, according to the company. The lesser is a 2,000 cc, 151 horsepower engine. Both have fourwheel drive versions. The price range across the board is 19.9 million to 34.8 million won.

Ssangyong last year had a 20 percent market share of the domestic SUV market. The Kyron had sales of 9,900, down from 11,700 in 2005. Domestically, the Kyron competes with the Hyundai Sante Fe and the Kia Sportage.

Looking as much like a minivan as an SUV, the crossover Kyron has a similar shape to Ssangyong’s Rodius. Fortunately, the Kyron lacks the awkward body extension sitting at the Rodius’ top rear that helped the model win an ugliest vehicle award from an online survey by British website cardata.co.uk in 2005.

That is apparently not enough to get people interested in the Kyron. One dealer said customers have not shown any interest in the new Kyron.

“This car is not selling. I am not getting any phone calls or visits for that car. Don’t ask me such questions because it really annoys me,” the Samsung-dong dealer said before hanging up the phone.

Maybe Renault Samsung dealers will fare better when the QMX, the company’s first SUV, comes out at the end of this year and in Europe early next spring. The QMX, developed in part because France-based Renault SA has no SUV of its own, elevates Renault Samsung’s standing in the Renault-Nissan global alliance. Renault bought Nissan in 1999 and Samsung in 2000.

Samsung got its start in the 1990s when it began paying for licensing rights to Nissan’s vehicle technology. Renault Samsung’s portfolio consists of its SM series, three cars based on Nissan designs. The QMX is the first vehicle in the alliance for which Korean engineers and designers played a major role.

Renault Samsung has in the past year doubled its staff at its development center in Giheung, where Korean engineers and designers worked with French counterparts. The QMX will be built in Busan. The QMX will maintain 90 percent of the look and features of the H45 concept model at the auto show, said Jo Joo-hong, a company spokesperson.

The QMX comes with four-wheel drive and a diesel engine with maximum horsepower of 177. Renault Samsung would not disclose the vehicle’s expected sale price, but a Renault Samsung dealer said it would probably be in the 25 million to 30 million won range. The dealer, Lee Ho-nam in Seoul, said the QMX’s design is “simple yet sophisticated” and has a chance to become a best seller. It will go up against the Kia Sorento and the Hyundai Sante Fe.

Renault Samsung’s goal in Korea eventually is to have 20 percent market share in every segment in which it has vehicles, CEO Jean-Marie Hurtiger said in an interview at the show. In 2006, that would have meant selling 41,300 units.

Hyundai Motor Co. chose to unveil the FD Estate station wagon. Perhaps it was not the most exciting choice, but its Genesis luxury car was already taking the company spotlight in New York, so the company probably had little left to choose from.

The FD was developed mainly for the European market, where station wagons and hatchbacks are popular. Hyundai hasn’t had a vehicle in that slot since it discontinued the Elantra Touring vehicle in 1998. Hyundai expects worldwide exports of 92,000 in 2008. The FD in Europe will be part of the i30 family, a new naming system for that market.

Back home, the wagon will carry the Avante name and be a low-volume model with anticipated 2008 sales of less than 10,000. The Avante wagon will start at 16 million won, according to a dealer. Engine options are a 1.6-liter four cylinder gasoline engine or a 1.6-liter turbo diesel.