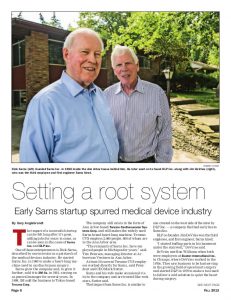 The impact of a successful startup can be felt long after it’s gone, adding jobs for years to come, as can be seen in the cases of Sarns Inc. and DLP Inc.

One of those entrepreneurs is Dick Sarns, described by one investor as a patriarch of the medical devices industry. He started Sarns Inc. in 1960 to make a heart-lung machine used in cardiac bypass surgery.

Sarns grew the company and, to grow it further, sold it to 3M Co. in 1981, staying on as general manager for several years. In 1999, 3M sold the business to Tokyo-based Terumo Corp.

The company still exists in the form of Ann Arbor-based Terumo Cardiovascular Systems Corp. and still makes the widely used Sarns brand heart-lung machine. Terumo CVS employs 2,000 people, 800 of whom are in the Ann Arbor area.

“The remnants of Sarns Inc. have employed people in Michigan for years,” said Tim Petersen, managing director at Arboretum Ventures in Ann Arbor.

Sarns and his wife make occasional visits to the company and are treated like rock stars, Sutter said.

That impact from Sarns Inc. is similar to one created on the west side of the state by DLP Inc. — a company that had early ties to Sarns Inc.

“I started buffing parts in his basement under the stairwell,” DeVries said.

DeVries met Ron Williams when both were employees at Baxter International Inc. in Chicago, where DeVries worked in the 1970s. They saw business to be had serving in the growing field of open heart surgery and started DLP in 1979 to make a tool used to deliver a cold solution to quiet the heart during surgery.

DeVries came up with the company, brought on a minority investor, and then Williams sold his Corvette to buy another slice of the company and became president, with DeVries as chairman. “We never had any other infusion of capital,” Devries said.

The company went on to produce six more lines of cardiac surgery products and employ about 270 people. Though the company was sold in 1994 to Medtronic Inc. for $128 million, its influence continues to be felt through its many offshoots.

Williams’ son Chris worked for DLP in its final years and now runs Medbio Inc., a medical device contract manufacturer in Grand Rapids. Medbio has 83 employees, about seven of whom worked for DLP.

And there are other spinoff effects.

Not to be left out of any conversation on spinoff contributions is Stryker Corp.

And Sarns was friends with another patriarchal figure, Stryker Corp. founder Homer Stryker, who introduced his son Jim to Sarns. The friendship led to business, because Sarns bought parts from Stryker.

Early startup successes like Sarns and DLP helped bring about another layer of the economy that hardly existed 25 years ago: specialized lawyers, accountants and other professional services to serve medical device startups, said Pete Farner, general partner at TGap Ventures LLC in Kalamazoo.

“The more activity that occurs, the more positive outcomes we’re going to end up with. It’s not necessarily if the company ends up lasting forever, but developing several talented management people who go on,” Farner said.

John Dahler, the CFO who worked at Accuri Cytometers Inc. before its sale to Becton, Dickinson and Co. in 2011, now holds that role at startup Delphinus Medical Technologies Inc.

“I liken it to a snowball. More activity generates more activity. We’re seeing more now than 15 years ago when I started Aspen (Surgical Inc.). We’ll see the same exponential increase in the next 15 years as the last 15,” said Dan Bowen.

3 with no time for retirement

Dick Sarns, Jim Devries and Ron Williams are not ones for retirement.

Sarns, 86, still holds the title of president of the company he founded in 1987, NuStep Inc., and runs the day-to-day operations.

Williams, who said he is in his 70s, is chairman of Medbio Inc., a Grand Rapids medical device contract manufacturer he runs with his son.

DeVries, 73, is a sculptor, and not the type that just has a pottery wheel in the basement to stay busy. He makes life-size bronze and stainless steel sculptures, including a 15-foot piece in Grand Rapids with LED lighting and running water. His work can be seen at jhdevries.com.

Looking back on the state’s medical device industry, they said things are a lot less lonely for new startups today than when they started their companies.

“There really wasn’t much medical technology, period, compared to today — 99 percent of the stuff we see today has been developed since 1960,” DeVries said of his early years at Sarns Inc.

When he and Williams started DLP Inc. in 1979, Michigan had a good base of technology, but the for the most part it hadn’t been applied to medical devices, Williams said.

“Things like tooling shops were available, but there’s a huge difference between making tail lights and precision parts for open heart surgery. That was a challenge, but some of the shops stepped up.”