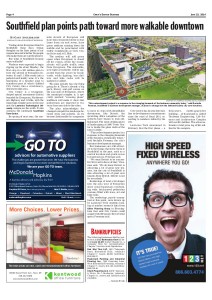 Tooling down Evergreen Road in Southfield these days brings thoughts on the finer points of car suspensions and whether the people who make them are careful about it.

But what if Southfield became more walkable?

Workers were expected to begin ripping up the street Monday, the first step in a $12 million plan to turn the stretch of Evergreen between 10 and 11 Mile roads into a pedestrian-friendly zone. It’s the beginning of a broader plan to transform part of what’s dubbed City Centre into a retail-heavy, downtown-like area.

City Centre is a triangular-shaped special assessment district bounded by Evergreen, Northwestern Highway and 11 Mile, with the municipal complex area on the east and the Lawrence Technological University campus on the south. It also contains the landmark Southfield Town Center.

By spring of next year, the one-mile stretch of Evergreen will have been winnowed down to four lanes from six and seven, have green medians running down the middle and be punctuated with traffic roundabouts at Civic Center Drive and at 11 Mile.

The median will add green space when Evergreen is closed off for events, while the roundabouts will guide traffic away from Evergreen. The sidewalks, now right at curbside, will be separated from the street by boulevards, while lighting, bus shelters and bike racks will be up-dated or added.

The plan already has one thing going for it: There’s already a big park, library and golf course on the east side of Evergreen, where the municipal complex is. A specially marked “crossing plaza” midblock will make it clear that pedestrians are expected to traverse from one side to the other.

The plan acknowledges the changed competitive landscape between cities and suburbs. As it’s become fashionable for companies to move to cities with identifiable downtowns, like Detroit, the sprawling office complexes of the suburbs have begun to look old-fashioned. The most striking piece of landscaping at 2000 Town Center is inside the glass walls of the tower’s lobby.

“This redevelopment project is a response to the changing demands of the business community today,” said Rochelle Freeman, the city’s business development manager.

But businesses are still attracted to the things that drew them to Southfield in the past, such as a central location and quick access to expressways, Freeman said.

The renderings, purely conceptual at this point, were drawn up by Lawrence Tech students looking at market research data from Gibbs Planning Group in Birmingham that said City Centre could support 645,000 square feet of retail space, Freeman said.

City Centre has drawn $120 million in development commitments since the start of fiscal 2014, according to numbers tallied by the city.

Lawrence Tech announced in February that the first phase — a three-story, 34,000-square-feet building — of its planned A. Alfred Taubman Engineering, Life Sciences and Architecture Complex will cost $15 million. The school estimates a total price tag of $55 million for the complex.