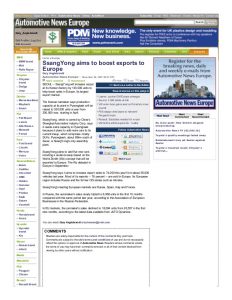 SEOUL — SsangYong will increase output at its Korean factory by 130,000 units to help boost sales in Europe, its largest export market.

The Korean carmaker says production capacity at its plant in Pyeongtaek will be raised to 330,000 units a year from 200,000 now, starting in April.

SsangYong, which is owned by China’s Shanghai Automotive Industry Corp, says it needs extra capacity in Pyeongtaek because it plans to add more cars to its current lineup, which comprises mostly SUVs. Pyeongtaek, about 65km south of Seoul, is SsangYong’s only assembly plant.

SsangYong plans to add five new cars including a sedan loosely based on the World Zenith (Wz) concept that will be exported to Europe. The Wz debuted in Europe in September.

SsangYong says it aims to increase export sales to 74,000 this year from about 65,000 vehicles last year. Most of its exports — 76 percent — are sold in Europe. Its European region includes Russia and the former CIS states such as Ukraine.

In Russia, the automaker’s sales nearly tripled to 8,958 units in the first 10 months compared with the same period last year, according to the Association of European Businesses in the Russian Federation.

In EU markets, the carmaker’s sales declined to 18,094 units from 26,557 in the first nine months, according to the latest data available from JATO Dynamics.