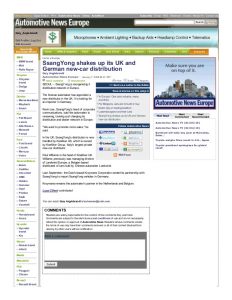 SEOUL — SsangYong is reorganizing it distribution network in Europe.

The Korean automaker has appointed a new distributor in the UK. It is looking for an importer in Germany.

Kevin Lee, SsangYong’s head of corporate communications, said the automaker is reviewing, training and changing its distribution and dealer network in Europe.

“We want to promote more sales,” he said.

Paul Williams is the head of Koelliker UK. Williams previously was managing director of Landwind Europe, a Belgian-based distributed of cars built by Chinese automaker Landwind.

Kroymans remains the automaker’s partner in the Netherlands and Belgium.