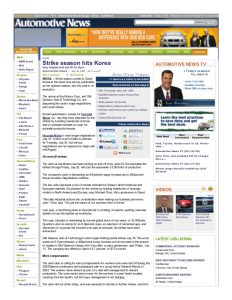 Gary Anglebrandt and Oh So Hyun

SEOUL —Strike season comes to South Korea at the same time and as predictably as the typhoon season, and this year is no exception.

Korean automakers, except for Hyundai Motor Co., say they have prepared for the strikes by boosting inventories at home and in overseas markets to cover for potential production losses.

Hyundai Motor’s union began negotiations July 12. A third round of talks is planned for Tuesday, July 24, but serious negotiations are not expected to begin until mid-August.

The union at Kia Motors has been striking on and off since June 28. Kia estimates the strikes through Friday, July 20, will cost the automaker 23,567units of production.

The company’s union is demanding an 8.9percent wage increase and a 200percent bonus increase. Negotiations continue.

The lost units represent a mix of models intended for Korean, North American and European markets. Kia planned for the strikes by building inventories of strategic models in North America and Europe, says Michael Choo, Kia’s spokesman in Seoul.

“We take industrial actions into consideration when making our business plan every year,” Choo said. “It’s just the nature of our business here in Korea.”

Last year, a monthlong strike at Hyundai led to a halting of exports, pushing overseas dealers to tap into beefed-up inventories.

This year, Hyundai is maintaining its normal global stock of one week, or 33,000units. Hyundai’s union is asking for an 8.9percent raise, an extension of retirement age, and 30percent of corporate net income to be paid as bonuses. No strikes have been announced.

GM Daewoo Auto & Technology’s union began holding partial strikes July 16. The union wants an 8.8 percentraise, a 400percent bonus increase and an increase in the amount of models in GM Daewoo’s lineup, Kim Yoon Bok, a union spokesman, said Friday, July 13. The company has offered a raise of 4.7 percent, or $75 a month.

The union also is calling for extra compensation for workers who were laid off during the 2000Daewoo bankruptcy and subsequent sale to a group led by General Motors in 2002. The workers were rehired as part of a deal with management to reward productivity. The union wants extra money for the workers to cover family troubles resulting from the layoffs, but Kim says management is not budging.

The union did not strike today, and was expected to decide on further strikes, said Kim Sung Soo, a GM Daewoo spokesman.

“We hope to solve everything through dialogue,” he said, adding that GM Daewoo expects no problems in supplying overseas dealers. The strikes have caused an estimated loss of 3,500 vehicles. Extra vehicles have been shipped to prepare for labor strife, he said.

Meanwhile, Ssangyong Motor Co.’s union agreed June 29 to a raise of $54 a month and $2,178in annual bonuses per employee.

Renault Samsung, Korea’s fifth automaker, has no union at its solitary plant in Busan.