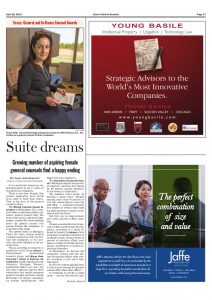 It’s no secret that women are underrepresented in the C suites of big American companies.

There is one door, though, that women apparently have found more open to them than others. That is the door of the general counsel’s office.

The Minority Corporate Counsel Association in Washington, D.C., every year looks at American public companies’ general counsel roles. The most recent survey, released in September, counted 105 women holding down the general counsel role among Fortune 500 companies, or 21 percent of the whole.

The pattern holds in Michigan. There are three women general counsels among the state’s 16 Fortune 500 companies, or 18.7 percent, the same ballpark as the national ratio.

This is according to research requested by Crain’s from Inforum, a Detroit-based professional women’s group, and Wayne State University‘s School of Business Administration, which together put out Inforum’s Michigan Women’s Leadership Index last year. For this story, Inforum and the WSU researchers this month examined general counsel positions among Michigan’s 50 largest companies by market capitalization. (See below for more numbers.)

The Association of Corporate Counsel‘s Michigan chapter also provided numbers, showing that among its 160 general counsel members, 41 are women, or 26 percent.

But they are an improvement over other executive officer numbers.

So why are women gaining more C-suite access through the general counsel office than other offices?

It’s tempting to ascribe a single cause — such as the work of a general counsel allows more leeway for raising children — but it’s most likely a combination of factors, said Terry Barclay, president and CEO of Inforum.

One factor is the number of women earning college degrees makes it more likely that they’re going to make headway somewhere, and with women soaking up 40 percent of law school degrees since the 1980s, it’s no surprise that it’s a legal position where that’s happening.

Other C-suite residents traditionally have come from the ranks of operations, Barclay said. “Most people going into the general counsel role are not from an operational background,” she said, leaving a path open to women armed with law degrees and experience.

Outsider status could be another factor.

For boards and CEOs seeking new senior-level opinions — perhaps to offset all the guys coming up from operations — it makes sense to look to the general counsel slot, Barclay said. Candidates likely will have worked for a few companies in the same industry or as attorneys for firms specializing in that industry — nice qualities to have for a role that has increasingly taken on more strategic responsibilities.

“So many women I know who have moved into the general counsel role are really well-equipped to advise on strategy because of the depth of experience they’ve had,” Barclay said.

Gerald Meyers, adjunct professor of management and organizations at University of Michigan‘s Ross School of Business and former chairman of American Motors Corp., said that if he had to take an educated guess as to why there are more women general counsels than other C-suite jobs, it’s because general counsels are required to have highly disciplined and specialized knowledge.

Women can increase their odds of getting the job by obtaining that knowledge, whereas the process for landing a CEO title is murkier.

“It’s a little different than the CEO job. There isn’t a single discipline that’s dominant; they come from all different disciplines,” Meyers said.

Mary Ann Hynes, an industry speaker who has served as general counsel to several global corporations and is credited as the first woman general counsel of any Fortune 500 company, said the main driver behind a general counsel hiring decision is the quality of the candidate. Other factors stay in the background as companies seek business-savvy people.

“They’re seeing the talent out there,” said Hynes, senior counsel in the Chicago office of global law firm Dentons.

Hynes wouldn’t venture any explanations on something as inherently complex as the decision-making behind hiring across industries. But she was happy to torpedo a few.

The idea that companies use the general counsel job as a place to show diversity in their executives is ridiculous, she said. “It’s a very special role; it’s being a confidante of the board and the chairman,” Hynes said. “It’s one of the most sensitive positions in the corporation.”

Smooth chemistry needs to exist between the general counsel and CEO to deal with sensitive issues. With so much at stake, diversity checklists are a tertiary consideration at best, Hynes said.

Another canard, she believes, is that women are not risk-takers and therefore more suited to a protective legal role, as opposed to chief executive. The general counsel works hand-in-hand with other company executives on matters like acquisitions, growth and competitive strategies. They are front and center when it comes to making deals. This is not territory for the risk-averse, Hynes said.

“If you want to be risk-averse, stay at home and lock the door,” Hynes said.

And then there’s the theory that women attorneys gravitate to general counsel because the position is more of a 9-to-5 job, i.e., one that leaves room for child-rearing, whereas cutthroat law firms demand all of a person’s time. Hynes’ experience as a general counsel says otherwise. Working in the C-suite of major corporations is a 24-hour-a day job involving people around the world.

“I have people who have needs in Thailand and Australia. I have to be there to meet their needs in the middle of the night,” Hynes said.

Meyers also discounted the theory that women are risk-averse, but said the perception that they are might play into hiring decisions.

“For the general counsel role, you’re not looking for a risk-taker. That person’s job is to protect stakeholders,” Meyers said.

Susan Diehl, vice president-legal and general counsel at NSK Americas Inc. in Ann Arbor, has worked as general counsel for three companies. She said people enter the field and are hired for all sorts of reasons, many of them having to do with particular pressures on a company at the time.

Diehl was drawn to the work by her love of business. “I always was attracted to being an in-house lawyer because I was a business junkie,” she said.

General counsels’ legal training gives them an edge in terms of persuasion, framing arguments and quickly learning new things, she said. “Lawyers have to do that all the time.”

Diehl said she has seen women approach in-house work because they think it’s 9-to-5 work — but she’s seen men do that, too. In reality, her work means traveling 60 percent of the time and working “partners’ hours” of 16 to 17 hours a day.

Anecdotally, she hears from other women in her field that they don’t always find the law firm life to be fulfilling, especially those who prefer more collaborative work. “Law firm life is not always welcoming,” Diehl said.

Aleksandra Miziolek took her position as general counsel and vice president at Novi-based Cooper-Standard Holdings Inc. in February after spending three decades at Dykema Gossett PLLC, where she directed the automotive industry practice.

Her industry experience was a big selling point, as was her M&A experience. That experience also means she moves easily in the male-heavy world of automotive, so she hasn’t felt out of place working among guys at her new job.

“It’s really pretty straightforward,” she said. “There are just many more women candidates that have gotten the experience necessary in order to really perform well in a role like the general counsel role. The pipeline with respect to other operational functions like CFO, COO — the pipeline just isn’t there yet.”

Other executive roles could follow lead of the general counsel slot. Meyers said women students make up almost half the students for his MBA courses.

“That’s new as of the last 15 to 20 years, more so in the last five to 10,” he said. With rising numbers of women with the right education and experience, other executive roles should begin to open.

“I do not subscribe to the attitude that it’s bias holding it down. I don’t deny there’s bias, but that’s overcome by competence,” Meyers said.

It also has to be said that while women might be showing progress in general counsel jobs, the numbers are still pretty low.

Those doing the hiring tend to go with what they know — themselves, Barclay said.

“I do not believe for a second that anybody at a company wakes up and says, ‘I’m going to discriminate today’,” she said. “We tend to hire and promote mini-mes. We’re most comfortable around people most like us.”

Since it takes extra effort to overcome that tendency, the result is exactly what one would expect. “It tends to get more homogenous as you go up the ladder, and the numbers back that up,” Barclay said.

Women now make up 58 percent of undergraduate degree and 60 percent of graduate degree students at Michigan schools, Barclay said. As businesses compete for talent, it would make sense that they start looking at previously left-out groups.

“I like to think we’re at a tipping point where we see even more women step into these roles,” she said.

WHERE WOMEN STAND IN FORTUNE FIRMS

Women held three, or 30 percent, of the general counsel roles at Michigan’s 10 public companies in the Fortune 501-1000 list.

The number of women holding general counsel roles at Fortune 500 companies in the entire country was 105, according to last year’s survey from the Minority Corporate Counsel Association. That figure was down from 108 the year before but up from 92 in 2008.

Another 84 women held general counsel jobs in the Fortune 501-1000 list, according to the MCCA report. The percentage of women holding general council positions in the entire Fortune 1000 was 18.9 percent.