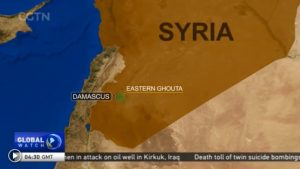 The UN Security Council adopted the resolution as one of the deadliest air assaults of the seven-year war pounded Eastern Ghouta. For a week, warplanes flown by government forces and their allies pounded the densely populated enclave east of Damascus, the last rebel bastion near the capital. More than 500 people have been killed. CGTN’s Gary Anglebrandt gives us more background on this rebel enclave.