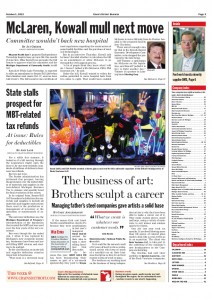 If the names Erik and Israel Nordin sound familiar, maybe it’s because they were semifinalists in last year’s inaugural Hatch Detroit contest for their idea to open a store selling furniture that they make.

Or because this year, WDET 101.9 FM has been broadcasting their names as part of a six-month sponsorship they paid to Wayne State University’s National Public Radio outlet.

Or it could be the natural result of 12 years of hard work as professional artists who keep as much of a watchful eye on their business discipline as they do on their custom works of wood or glass.

The brothers say working hard on the business of being independent artists is why they have been able to make a career out of it. They make custom pieces, small and large, using a variety of materials, to suit indoor and outdoor spaces for clients.

One job last year took six months. It involved blowing more than 100 pieces of colored glass made to look like a coral reef to go in an aquarium. The client was Rock Ventures LLC, to take part in the outfitting of the company’s new headquarters in the Compuware Building.

The Nordins had sent their portfolio to Quicken Loans Inc., one of the Rock Ventures companies, and it filtered upward. Jeff Cohen, CEO of Rock Cos., called to ask them to share some ideas for the design of the company’s new executive suites.

The lobby design included a 10-foot-long saltwater aquarium, and the Nordins, after some thought, suggested using blown glass to make a coral reef. They were given the go-ahead to work with the lead design firm, Southfield-based Rossetti Associates Inc.

The Nordins say their strategy is to come up with ideas that are artistically original, catered to the client and fitted to the setting. But the business side means taking a project, its high-profile client and its deadlines seriously. Artists have to be careful not to over-promise and under-deliver, they said.

“We have to reel each other in” to stay disciplined, Erik said.

With that in mind, they studied coral and also did studies of how glass appears under different lighting and algae conditions underwater before making the final pieces. Then they spent four months sweating inside the glass aquarium, getting in and out through a hole in the top just big enough to let one person through.

They also reached out to their business network for help, knowing such a large project would require more people to meet the deadline.

Israel, 35, studied ceramics and glass at the College for Creative Studies, and Erik, 44, picked it up over the years. But they figured they’d better bring in more talent, including their brother, Chris Nordin, who with his wife, Michelle Plucinsky, runs the glassblowing business Furnace Design Studio LLC in Dearborn.

They pulled together a total team of six glassblowers. The resulting 122 pieces range from 4 inches to 39 inches tall, and represent about 20 species of coral, they said. Three “coral brains” are the central pieces.

The team also made a grouping of tall steel and glass pieces that hang, and swivel, from the ceiling next to the indoor basketball half-court, as well as “botanical glass” pieces made to look like plants standing at the ends of rows of desks. All combined, they made 260 pieces of glass.

The brothers run their business out of the building through which their father, Ronald Nordin, used to operate Detroit-based Bulldog Steel Inc. But the property on Michigan Avenue near Livernois looks as vacant as any other in the area.

There is no front office where they work, no conference meeting rooms with long tables. There are a few old barbershop chairs in a dimly lit room cluttered with pieces of grimy steel and tools, some looking like they recently have had attention, others like they have been sitting for years.

The place feels like an oversized garage belonging to a guy who has never cleaned it out. But this is where they bring clients who have paid anywhere from $2,500 to $170,000 for their work, Erik said.

The Nordin brothers said their 2011 revenue was about $250,000. They call their place, 12,000 square feet in total, the “Batcave.” The large main room contains an industrial overhead crane and a large machine for flattening sheets of coiled steel, and is equally cluttered in a way that would make newcomer artists in search of artsy Detroit grit drool.

“Most clients love it,” Israel said. Occasionally they don’t, such as the time when a high-profile client worried about her dress getting dirty.

From here, the brothers run Detroit Design Center LLC, shaping metal, wood and glass into sculptures, furniture and design pieces for indoor and outdoor settings. They prefer to check out spaces first and work from there, rather than crank out pieces and put them into galleries.

“What we create is whatever our customer needs,” Erik said.

Their work can be seen in downtown Brighton, where they have six metal and glass sculptures. They also have outdoor pieces in Beverly Hills and Birmingham. Restaurants have been a major source of business. One example is a glass sculpture, 22 feet in diameter, installed in the ceiling of Mosaic Restaurant in Greektown, recently renamed Santorini Estiatorio.

The Hatch Detroit idea to open a store specifically for furniture so far hasn’t materialized but Erik said it’s still in their future plans.

Lately, though, the brothers have been focused on using their cave to put steel and glass together into jagged shapes for their first public art show, to be held at The Whitney this weekend.

‘Do what you say’

Kelly Deines, principal and creative director at Rossetti, said working with artists should be no different from working with electricians, plumbers or cabinet makers.

“Artists are an integral part of the subcontracting world,” he said. “We rely on artists as much as we rely on any other trade to manifest design.”

Erik Nordin, who led the talks for the brothers, was able to communicate with creatives while putting together marketing plans and proposals that have credibility with businesspeople, he said.

It’s helpful, Deines said, to have artists who don’t come in with “a lot of ego, stamp their foot down and say, ‘Look, I’m the creator of this vision and this is what I want.’ ”

Derek Weaver, who leases space to artists at the 4731 Arts Incubator & Gallery on West Grand River Avenue in Detroit and this year has worked with more than 45 graffiti artists on a street art project along that corridor, said he’s seen too many artists with talent go nowhere because of their lack of business training.

He said he knows one artist who made a well-executed series of paintings, but the problem was that the scenes all were of turkeys at Thanksgiving. Not a single one sold, he said.

“That’s a No. 1 reason why artists fail or never take their talents anywhere. There are a ton of artists in Detroit who have amazing abilities but who don’t have the background or information that artists in New York or Chicago have to be successful,” Weaver said.

Erik and Israel worked for 10 years managing their father’s two steel businesses. They took over the Bulldog Steel building in 2000 and began doing their art business full time. The brothers used their savings to buy the building for $80,000 from their father in 2010.

Their father taught them to stay on top of the business end of things.

“One significant thing I tried to teach them was to say it the way it is and do what you say,” said Ron Nordin, 72. “Play it straight and people will like you.”

Too often, artists request repeated extensions on commissioned projects, ask for more money or don’t take expenses seriously, Erik said. He and Israel saw some of this first-hand when they rented parts of their building to other artists, something they no longer do.

“Artists don’t realize how hard their work is, so they do sell cheap or miss deadlines,” Israel said.

The brothers work hard not to fall into the trap many artists fall into of selling themselves short. It’s common for people to approach artists with the attitude that they are doing the artist a favor or that the artist should want to provide free work in return for exposure, they said.

“People come and expect me to be cheap like Ikea because I’m an artist,” Israel said. “As an artist, I have to have self-respect because if I don’t, I’ll get taken advantage of.”