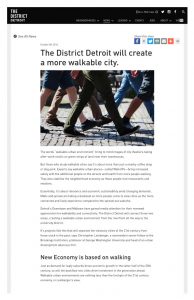 The words “walkable urban environment” bring to mind images of city dwellers taking after-work strolls on green strips of land near their townhouses.

But those who study walkable cities say it’s about more than just a nearby coffee shop or dog park. Experts say walkable urban places—called WalkUPs—bring increased safety with the additional people on the streets and health from more people walking. They also stabilize the neighborhood economy as those people visit restaurants and retailers.

Essentially, it’s about relevance and economic sustainability amid changing demands. Malls and sprawl are taking a backseat as more people come to view cities as the more connected and lively experience compared to the spread-out suburbs.

Detroit’s Downtown and Midtown have gained media attention for their renewed appreciation for walkability and connectivity. The District Detroit will connect those two areas, creating a walkable urban environment from the riverfront all the way to the university district.

It’s projects like this that will separate the visionary cities of the 21st century from those stuck in the past, says Christopher Leinberger, a nonresident senior fellow at the Brookings Institution, professor at George Washington University and head of an urban development advocacy firm.

New Economy is based on walking

Just as demand for leafy suburbs drove economic growth in the latter half of the 20th century, so will the backflow into cities drive investment in the generation ahead. Walkable urban environments are nothing less than the linchpin of the 21st century economy, in Leinberger’s view.

“We’ve now satisfied the demand for driveable suburban places. The pent-up demand is for what the Ilitches are proposing,” he says. “It’s not just great for the city of Detroit, it’s important for the entire metropolitan economy.”

Leinberger is an author of “Foot Traffic Ahead: Ranking Walkable Urbanism in America’s Largest Metros,” a report released in June 2014 that examined the country’s top 30 metropolitan areas and ranked them according to their “walkable urbanism.” Detroit came in at 22.

“That should be no surprise because for 100 years you were the center of car manufacturing,” says Leinberger, who worked with General Motors Corp. on its move to the Renaissance Center.

What he did find surprising was that metro Detroit was among a handful of areas making the fastest moves toward the top of the list, territory presently occupied by Washington, D.C., New York and Boston.

Leinberger, upon seeing plans for The District Detroit, called the idea “stunning” and says sweeping, highly connected projects like this give cities an advantage.

“This is exactly why downtown Detroit, along with Miami and Atlanta, are leading the way,” he says. “This kind of development puts the economic foundation under an entire region’s economy.”

Some 30 to 40 percent of American households want to live in WalkUPs, Leinberger estimates, and in metro Detroit, only three to four percent currently do. “Do the math. We have a generation to catch up with demand.”

The report presents the walkable urban place as the counter to the driveable suburb. WalkUPs are denser, more connected, have more diverse forms of real estate and accommodate multiple forms of transportation, including bicycles and feet. Home, school, work, shops and restaurants are all reachable by foot.

The report also showed metro Detroit’s WalkUPs gaining on its suburban rivals when it came to demand for office space, something that’s not happened in decades. Detroit now is in the No. 2 spot for U.S. metro areas with the fastest-growing WalkUPs, behind Miami and ahead of Atlanta.

Like most metro areas, Detroit’s WalkUPs had been losing momentum since the 1950s. “In this real estate cycle,” Leinberger says referring to the period from 2010-14, “you changed course.”

His report pointed to Detroit’s Downtown and Midtown as epicenters of this shift because of corporate investment and new residential, retail and educational development, as well as new innovative businesses.

Connected developments like the Red Wings arena and community events center, M1 rail system and urban residences soak up money that 20 years ago would have been spent on freeways and subdivisions. And these developments attract jobs, such as the 8,300 construction and related jobs and 1,100 permanent jobs that The District Detroit is estimated to bring.

Refusing to build walkable infrastructure today would be like refusing to build freeways and subdivisions in the 1960s, says Leinberger. “This is happening throughout the country. If you don’t do this, you’re basically a 20th century economic metropolitan area competing in the 21st century. You’re just obsolete.”