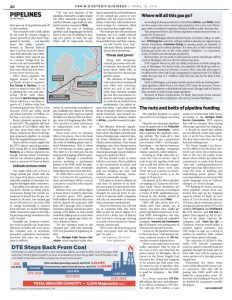 The pipeline business is a good one to be in if a company can swing it.

Plans for new interstate pipelines must be approved by the Federal Energy Regulatory Commission, which then regulates the pipeline’s ensuing activity. The trade-off is that pipeline owners get a guaranteed rate of return. FERC — not the pipeline owner — sets the fee, known as a tariff, that pipeline companies charge customers, called shippers.

In doing so, FERC takes into account the “cost of service” that it took to get the pipeline built and sets a tariff that allows the company to recoup those costs, plus some extra as a return on investment. A typical return is in the range of 10 percent.

Developers of the Rover pipeline are seeking a 9.75 percent rate of return, while Nexus developers are asking for 10.7 percent, according to a review of FERC applications performed by Eric Brooks, analyst at industry research outfit Platts.

FERC will take action later if it thinks rates have gotten out of whack, but these rates might get pretty high before it gets nosy. A current FERC investigation was triggered when it suspected a pipeline company, Tuscarora Gas Transmission Co. of Houston, was getting rates of 23.6 percent and 24.9 percent.

“Some say the pipeline business is the least risky,” said Samuel Andrus, industry analyst at IHS Inc., another research organization.

These costs make their way into utility customers’ bills, by way of the cost to buy and ship fuel for power plants. In Michigan, this is known as the Power Supply Cost Recovery fee. If that fuel happens to be natural gas that came into the state by way of pipeline, then this cost includes the rate the utility paid for shipping — the FERC tariff.

It should be noted that utilities are not allowed, under state regulation, to profit from these fuel fees. The fees must cover the cost to get fuel and nothing more.

The Power Supply Cost Recovery fee differs from the basic electricity rate set by the commission. This is the one the public hears about when utilities go before the commission to make their formal “rate case,” seeking permission to charge rates that allow them to recoup the costs of building and maintaining power plants. This cost materializes on customer bills under language such as “delivery charges” or “service charge.”

The funding for Nexus, and any other pipeline, comes from customers that sign up for shipping capacity before it’s built, on contracts of 15 to 20 years. In the case of Nexus, those customers are natural gas producers plus DTE’s own utilities, DTE Gas Co. and DTE Electric Co. DTE Electric and DTE Gas together have signed up for 10 percent of the pipe’s capacity, the company said. Union Gas Ltd., a Chatham, Ontario-based utility, is another signed customer, and DTE hopes to sign up a string of utilities in northern Ohio whose terrain Nexus passes through.

The outcome of all this is that while DTE Electric customers won’t be asked to directly fund the pipeline through the basic rates in their bills, they will be paying for some portion of it through power supply fees.

Fortunately for them, these costs will be diluted by Nexus’ other customers, who also will be paying that FERC tariff with its baked-in construction costs. Effectively, the building of Nexus will be funded by companies outside Michigan.