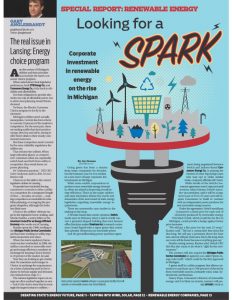 Any discussion of Michigan’s utilities and their priorities must include the state’s consumer choice program.

When asked about their legislative preferences, both DTE Energy Co. and Consumers Energy Co. circle back to reliability and affordability. It is their obligation to provide electricity not only at affordable prices, but to show clear planning toward future demand.

To them, the Electric Customer Choice program is the fly in the ointment.

Michigan’s utilities aren’t actually monopolies. Current law forces them to concede 10 percent of the market to competitors. For the most part, these are trading outfits that don’t produce energy; they buy and sell it, aiming to offer better deals to their mostly commercial customers.

But these competitors aren’t covered by the same reliability regulations the utilities are.

That irritates the utilities. When large industrial plants, as competitors’ customers often are, repeatedly switch back and forth from utility to competitor, they wreak havoc on power planning.

Choice is on the table in the current legislative debate in Lansing.

Proposals have included forcing customers to commit to either a utility or a competitor for a designated length of time — decades, not years — making competitors accountable for reliability planning, or scrapping the program altogether, although this looks less likely now.

Choice is the utilities’ ultimate target in the legislative horse-trading, said Martin Kushler, a senior fellow at the American Council for an Energy-Efficient Economy who works out of Lansing.

Kushler spent the 1990s working in the Michigan Public Service Commission and has been working on utility regulation issues here ever since.

When the state’s regulatory framework was last overhauled, in 2008, the utilities conceded on renewable energy and energy efficiency mandates in exchange for keeping Choice limited to 10 percent of the market, he said.

Now they are looking to get a better deal: No mandates and changes to Choice, in exchange for acquiescence on a form of planning used in the industry to forecast supply and demand. (See related story.)

The various legislative topics on energy are often mashed together as one — but it’s the choice issue that is seemingly the largest irritant to utilities.