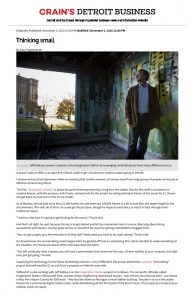 It doesn’t take an MBA or an open line of bank credit to get a business or creative project going in Detroit.

Creative and social entrepreneurs alike are realizing that smaller amounts of money raised from large groups of people can be just as effective at launching efforts.

The film, “Lemonade: Detroit,” is about the spirit of entrepreneurship rising from the rubble. But the film itself is an exercise in creative finance, with the producer, Erik Proulx, raising funds for the project by selling individual frames of the movie for $1. Buyers will get listed as producers in the movie credits.

As of Monday, he had sold more than 12,000 frames. He said there are 126,000 frames in a 90-minute film, the target length for the documentary. If he sells all of them, he could get the job done, though he hopes to raise twice as much in total through more traditional means.

“I have no idea how I’m going to get funding for the movie,” Proulx said.

And that’s all right, he said, because the key is to get started and let the momentum take its course. Worrying about hiring accountants and lawyers, leasing space and so on shouldn’t be cause for getting intimidated or bogged down.

“You can get caught up in the enormity of all that stuff. Really what you have to do is get started,” Proulx said.

He should know. His moviemaking career began when he got laid off from an advertising firm and he decided to make something of the situation. His movies are about others who have done the same.

“You will eventually need a lawyer, you will need a presentation that shows the five-year, 10-year viability of your company, but right now, just get going,” he said.

Supplying the technology for the frame fundraising scheme is Jerry Paffendorf, the person behind the Loveland “inchvesting” project that sells land for $1 an inch from a property on Detroit’s east side.

Paffendorf is also working with Jeff DeBruyn on the Imagination Station project in Corktown. The nonprofit, officially called Imagination Station of Roosevelt Park, consists of two neighboring abandoned houses – one of them a burned out shell – purchased in May from Wayne County for $500 each. They face the infamous Michigan Central Station building. The plan is to turn the usable house into a community digital media center, while demolishing all but the façade of the burnt house. That property is to become an outdoor public art space.

Using Kickstarter, a social media website for funding projects, the nonprofit has raised $2,000 for cleaning, securing and buying equipment for the properties. The nonprofit also recently obtained the rights to purchase five empty lots to the south of these properties.

Social media, unsurprisingly, is a big part of this community. The idea to sell frames for the documentary came unsolicited from a Twitter user, Marcel Santiz, who saw Proulx speak at the TEDxDetroit conference in September.

People involved in the type of social entrepreneur projects DeBruyn and Paffendorf are working on find plenty of opportunity to work together in the real world too. And the scene in Detroit is open, DeBruyn said. Anyone with an idea shouldn’t be too timid to speak up or think only cool, hipsters are welcome.

“I’m definitely not cool, I’m definitely not a hipster,” DeBruyn said, encouraging people with ideas to get to work and not worry about anyone’s opinion. DeBruyn is president of the Corktown Residents’ Council and is a manager at Manna Community Meal Soup Kitchen, as well as Day House, a shelter for women and children. But before that, he was a small business owner who went on to earn a law degree.

Seeing opportunity when times are down may be the only requirement. For Detroit, the remnants of past industrial might — materials, property and talent — are available to just about any anyone who possesses some drive.

A former New Yorker, he was part of several projects associated with terms such as “hackerspace” and “fablab.” These are usually collaborative get-togethers of people who are good at making things, be it with electronics, software or metal-forming. He is now here, trying to find a permanent home for his Mt. Elliott Makerspace project to get youth involved in making things.

During his work for this and related projects, he came across Detroit-based distributor, Perry Screw & Bolt Corp., which gave him access to industrial-grade fasteners for half the price of retail.

“They beat the prices of the big chains, like Home Depot, by 50 percent,” Sturges said.

Micro-renting opportunities are also on the scene, or space for people with fledgling creative startups, but without the ability to lease commercial space.

Andy Didorosi is the owner and CEO of Paper Street Motors in Ferndale. (He also is involved in a fundraising effort of his own: the restoration of a bicycle racetrack at Dorais Playground in Detroit.

He rents office space and industrial bays in the 22,000-square-foot Ferndale building that once was the home of a company that restores property damaged from fire and floods.

Rent is usually about $300 a month, depending on the space, and includes utilities, Internet access and ice cream.

He calls Paper Street Motors a small business incubator. The point is to give people with ideas a more professional spot to pursue them, without having to pay big rent. This way, a person can invite someone for a meeting at a space other than the person’s bedroom. Conference space is also available for tenants.

Paper Street opened in April, and the 13 office spaces are full. Most of the 23 industrial bays are available. Businesses already there include a Web designer, music promoter, bicycle building and repair service, and an auto repair service. Leases are available for as short a term as six months.

“We’ve found that by the end of six months, you pretty much know if your idea is going to work or not,” Didorosi said.

Similarly, for inspired foodies, there’s The Culinary Studio in Southfield. Using the concept of shared space, this enterprise offers commercial kitchen space to professional chefs, restaurateurs, caterers or people with recipe ideas to do some early market testing.

The Culinary Studio is scheduled to open on Nov. 16 (a grand opening date of Nov. 1 was pushed back) in the Applegate Shopping Center on Northwestern Hwy. east of Inkster. Kitchen time can be rented for $12 to $24 per hour, depending on the time and frequency. Consultations on meeting health and safety regulations, as well as other food industry issues, are also planned to be available.