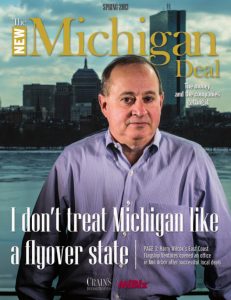 There are plenty of words that one might expect the head of a national investment group to use when describing Michigan, but “miracle” isn’t one of them.

As national investing has slowed, Michigan has gone in the opposite direction, adding firms and VC dollars invested in businesses, he said.

Last year, while the amount of venture capital invested around the country dropped 10 percent to $26.5 billion, Michigan’s share nearly tripled, to $232 million from $85 million, according to the most recent MoneyTree Report by PricewaterhouseCoopers and the NVCA.

There were 47 venture-backed deals in Michigan last year, compared with 36 in 2011, according to the MoneyTree report.

It’s not just the funding that has grown — it’s the number of funders, as well.

Since 2008, five Michigan-based venture funds have opened, bringing the total of homegrown funds to 21. In 2001, there were only seven.

Many have received investments from the state’s two funds of funds: Renaissance Venture Capital Fund and Venture Michigan Fund, which collectively have raised nearly $325 million to invest in VC firms that support Michigan companies.

It’s important not to overstate the case: Michigan remains a small player compared with the investment hotbeds of California, Massachusetts and New York. California had 1,521 venture-backed deals last year and Massachusetts 410, according to the MoneyTree report. Investments in California-based companies totaled $14 billion.

Still, what is happening in Michigan has caught the attention of VCs around the U.S.

“The rest of the country is seeing declines in the number of venture capital firms and venture capital professionals … everywhere, except for Michigan,” Heesen said. “You really have something to be proud of.”

Setting up in Michigan

Outside players have taken notice, too.

“Firms in Boston and Chicago routinely are making sure they have their ear to the ground and know what’s going on in Michigan,” said Harry Wilcox, COO and general partner at Cambridge, Mass.-based Flagship Ventures, which opened an office in Ann Arbor, the base of the state’s venture capital industry.

Flagship has been active in Michigan for 15 years and was part of one of the state’s biggest recent exits — the $205 million sale of Ann Arbor-based Accuri Cytometers in 2011.

Wilcox sees potential in Michigan for investments in medical devices and alternative energy. He said he has been impressed by the cost savings and effectiveness of dollars spent in Michigan.

Wilcox estimates it costs 20 percent less to get things done in Michigan than on the coasts but is quick to point out it’s not just thrift that draws venture capitalists who used to view Michigan as a flyover state.

“It’s not just that things cost less, because I don’t think that’s the difference,” he said. “It’s just that people are very entrepreneurial. … There are not as many venture dollars around, so they view them as more precious.”

The Michigan office is Flagship’s first branch outside its Cambridge home. The firm chose Michigan because of the technology being developed at universities in the state and a base of entrepreneurs coming out of companies in the pharmaceutical industry and software development, Wilcox said. He also praises the support from Lansing.

“The state should get credit for doing the right things to support entrepreneurs,” Wilcox said.

Although Michigan’s venture world is growing, it’s still small, making for a less competitive environment. In Cambridge, by comparison, “I look out my window and see offices of maybe 25 venture capitalists,” Wilcox said.

Heesen of the NVCA said the assets Michigan has going for it compared to those in California include valuations that aren’t at Silicon Valley levels, an educated workforce at a lower pay scale and a lower tax burden.

Heesen also pointed out that it’s not that hard to get to Ann Arbor from the coasts because Detroit Metropolitan Airport is so close.

The sector that has drawn the most investment by far is health care at 40 percent of all capital managed in the state, according to the Michigan Venture Capital Association’s most recent annual report, which came out in 2012. Other major sectors are information technology, alternative energy and advanced materials and manufacturing.

At the time of the sales, all three companies were University of Michigan spinoffs based in Ann Arbor.

Jeff Barry, a partner at Ann Arbor-based Plymouth Management Co., moved to Michigan from the Washington, D.C., area in 2007. In that time, Barry said, the investment scene already has changed.

“It kind of looked like the Wild West,” he said. There were some dedicated, active firms. But the community was small, and there weren’t many options for referrals, leading to “gaps in the financing continuum,” Barry said.

Many venture capitalists in Michigan worked in California before opening local offices. They saw fertile ground to be tilled in a state with respected research universities and talent but little venture activity.

For Beringea LLC — whose $490 million under management makes it the state’s largest VC firm — there also was an opportunity to fill a funding gap for companies needing $3 million to $10 million in growth equity.

“I’m an example of a person willing to move from the West Coast,” said Jeff Bocan, managing director of Beringea. “I don’t regret my decision to come here, and our core thesis has proven out.”

The family side of things was a factor, too; many of these investors talk about how they preferred to raise a family where the pace was easier and the money spent on a house would get them something much nicer than in Silicon Valley.

Tony Grover and Mark Weiser at RPM Ventures moved back to the Midwest after spending time in Silicon Valley.

“We knew we had all sorts of assets in our backyard,” Grover said of their decision to start a firm in Michigan. They saw “tremendous technical talent” and intellectual property at the universities and the presence of Fortune 500 companies in the Great Lakes region.

“We looked at those assets and said, … do you really need another venture capital firm in Silicon Valley?” he said.

Today, the field in Michigan isn’t overly crowded like Silicon Valley or Boston, where firms have more competition for any given deal. Flagship’s Wilcox said that makes it possible for outside investors “to come in and invest at reasonable valuations.”

Even so, more competition for deals is needed to fill out the state’s venture capital and private equity ecosystem, several leaders in the state’s investment community say.

“Silicon Valley has proven that having more available capital, everybody wins in that situation,” said Beringea’s Bocan. “Yes, it’s more competitive, but it attracts more entrepreneurs. There’s a multiplier effect.”

With most Michigan venture firms at or below $50 million, a need will grow for more and bigger funds to help portfolio companies and startups achieve their full potential. Although it varies by industry, the rule of thumb is that a company needs $5 million to $25 million to realize its potential, Bocan said.

“We can’t put $25 million into one company by ourselves,” he said. “We have to look for investors at later stages.”

For example, Plymouth Management invests in growth-stage companies with at least $1 million in revenue. The firm looks at 300 deals in a typical year and invests only in four or five, CEO Mark Horne said.

When negotiating with companies, he said, “it’s fairly rare to have another competitive term sheet on the table.” While that may translate into favorable valuations for investors, it also means some good deals are not getting funded, he said.

Jeff Williams, the CEO who led Accuri and HandyLab through their exits, said the state still has a pressing need for more VC firms, but it has come a long way in the past 15 years.

Williams, who grew up in Michigan, moved back to the state in 1997 when he co-founded Ann Arbor-based Genomic Solutions Inc., eventually leading that company through an initial public offering and a subsequent acquisition by Harvard Biosciences Inc. in 2002.

When he first came back, Williams had a hard time finding accountants, lawyers, banks and landlords who understood high-tech startups.

“They were used to talking to tier-one (auto) suppliers with lots of capital equipment. … No one knew what a wet lab was,” Williams said. “It’s gotten a lot easier.”

For life sciences venture funding, especially for larger follow-on investments, the state still has a small playing field, he said.

“It sure would be nice if we had some additional venture funds,” Williams said. “We’re still very dependent on the West Coast and East Coast or at least Chicago and Cleveland for follow-on” investments.

Heesen at the National Venture Capital Association said that despite the encouraging signs coming out of Michigan, another challenge that remains is attracting talented managers to run the startups.

“It’s still difficult to get people to move out of California” despite the heavy traffic, high cost of living and high taxes there, he said.

Tim Petersen, chairman of the MVCA and managing director of Ann Arbor-based Arboretum Ventures, said the ecosystem-building is a 30-year process.

“The challenge for the next 15 years is to keep it going,” he said.

Michael Kell, a principal with the Credit Suisse Customized Fund Investment Group, which manages the Michigan 21st Century Investment Fund and Venture Michigan Fund, said more firms and more successes are needed to attract more law, accounting and other professional services firms that are aimed at the venture capital and private equity world. Homegrown successes will lead to young entrepreneurs and investors with the capital to support more endeavors.

“We need more successful exits,” Kell said. “We’ve had a few, but we’ve really not yet seen the tree bear fruit. When it does, it creates a lot of overnight young millionaires.”