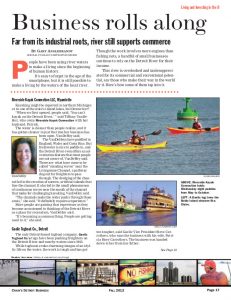 People have been using river waters to make a living since the beginning of human history.

It’s easy to forget in the age of the smartphone, but it is still possible to make a living by the waters of the local river.

Though the work involves more engines than fishing nets, a handful of small businesses continue to rely on the Detroit River for their income.

This river is overlooked and underappreciated for its commercial and recreational potential, say those who make their way in the world by it. Here’s how some of them tap into it.

Kayaking might be expected in northern Michigan or in one of the state’s inland lakes, but Downriver?

“When we first opened, people said, ‘You can’t kayak on the Detroit River,’ ” said Tiffany VanDeHey, who owns Riverside Kayak Connection with her husband, Patrick.

The water is cleaner than people realize, and it has gotten cleaner in just the time her business has been open, VanDeHey said.

The VanDeHeys have paddled in England, Wales and Costa Rica. But freshwater is nice to paddle in, and the Detroit River even offers an adventurous feature that most people are not aware of, VanDeHey said. There are what have come to be called “standing waves” near the Livingstone Channel, a pathway dug out for freighters to pass through. The dredging of the channel led to the creation of narrow, artificial islands that line the channel. It also led to the small phenomenon of continuous waves near the mouth of the channel that make for challenging kayaking, VanDeHey said.

“The channels make the water pushy through those areas,” she said. “It definitely requires experience.”

More people are gaining that experience as they become accustomed to thinking of the Detroit River as a place for recreation, VanDeHey said.

“It’s becoming a common thing. People are getting used to it,” she said.

The only Detroit-based tugboat company, Gaelic Tugboat Co.‘s tugs have been pushing freighters on the Detroit River and nearby waters since 1965.

While tugboats evoke charming images of an idyllic life on the water, the work is tough and has gotten tougher, said Gaelic Vice President Steve Carrothers, who runs the business with his wife, Patricia Hoey Carrothers. The business was handed down to her from her father.

As freighter traffic has decreased, so has Gaelic’s business.

“There was a saying in the 1960s that a freighter passed Detroit every 20 minutes,” Steve Carrothers said.

Gaelic once had a fleet of 13 vessels. It now is down to three tugs and one fueling barge for freighters. The fueling accounts for the bulk of the company’s business these days.

The old-school nature of the tug business also means few young people are prepared to take over what business remains.

“You don’t have a new generation of new tug captains coming up,” Carrothers said. “Our guys all have 20 to 30 years of experience at minimum.”

Life in the tug business isn’t without its interesting moments, though. Several years ago, when a movie was being shot in Detroit, Gaelic was called on to help retrieve a car from the river. “They actually drove a stunt car off the Belle Isle bridge,” Carrothers said.

The Carrotherses also run this business, which offers tours of the Detroit River during the summer.

Diamond Jack, formed in 1991, now has three boats — two based in Detroit and one in Wyandotte. But it’s the private rental business that provides most of the revenue — about 65 percent of it, Vice President Steve Carrothers estimates. That wasn’t expected when the business launched.

“We were just going to give public tours with one boat,” he said. “Within a year, we found such a need for private charters, we added a second boat and then a third.”

Private charters cost between $600 and $1,500, depending on the size of the boat and when it’s needed.

In the meantime, a welcome development has occurred on the river’s banks: The Detroit RiverFront Conservancy’s work has made the area much more pleasant for Diamond Jack’s customers, who head to the foot of Rivard Street to meet the company’s boats.

“We got the primo spot,” Carrothers said. “It was mostly a desolate area before … they (the RiverFront Conservancy) made it alive again. They made everybody feel at ease coming down to the water.”

No listing of Detroit River-based businesses could exclude the one that has its own ZIP code for delivering mail to passing vessels.

The J.W. Westcott Co. acts as a local agent for passing vessels, handling paperwork with local government offices, picking up and dropping off crew members and delivering mail, spare parts and anything else the ships need.

Owner James Hogan is the fourth-generation head of this family business that has been around since 1874.The ZIP code 48222 applies to the “Detroit River Station,” Westcott’s small, squat headquarters building next to Riverside Park, just to the west of the Ambassador Bridge.

The company has two boats in its fleet — the J.W. Westcott II and the Joseph J. Hogan — that make runs to passing ships.

The ships “don’t have to stop. We’re doing it on the move,” Hogan said.

That means the schedule at J.W. Westcott is 24 hours a day, seven days a week. Fleet Capt. Sam Buchanan said the business makes about 5,000 deliveries a year.

Then there are the people who see the river get the best of them. Buchanan said J.W. Westcott rescues at least a few people every season, such as a guy who jumped off the Ambassador Bridge 20 years ago after going on a shooting rampage or the teenagers who took off in a relative’s boat, failed to use the plug in the boat’s bottom and ended up stuck between a dock and a freighter, sinking and nearly getting crushed at the same time.

Bill Redding, dispatcher and boat captain, has been with the company 25 years and counts two events as among the most memorable: Meeting Jacques Cousteau when he came through on his famous ship Calypso and the time a local woman came to pick up an unusual delivery.

“She came here and took a donkey off a boat” after buying it and arranging to have it delivered from Duluth, Minn., he said.

The Infinity and the Ovation carry 45,000 passengers a year.

In business for 25 years, Infinity and Ovation Yacht Charters LLC rents its two yachts — the Infinity and the Ovation — from its main dock in St. Clair Shores and docks in downtown Detroit for weddings, corporate events, fundraisers and other occasions.

The company does 220 rentals a season between the two ships, showcasing Lake St. Clair and the Detroit River to 45,000 passengers a year, General Manager Steven Rybicki said. Demand for cruises that begin in downtown Detroit has spiked because of the RiverWalk and other downtown development, Rybicki said. The number jumped from five a year before the RiverWalk was built to 40 this year as more people demand a cruise that includes a downtown and Detroit River experience.

“There’s such a positive vibe right now with downtown and the RiverWalk,” Rybicki said.

The demand for downtown cruises also has come from corporate clients who want to show visitors from other states and countries the view. Many visitors are pleasantly surprised by the view of Windsor, he said.

Wheelhouse Detroit offers bicycle sales, rentals and tours of the city from its base right on the Detroit River just east of the Renaissance Center on the RiverWalk.

Wheelhouse Detroit came about in a bit of lucky timing when its owners were looking for a space to put up a shop at the same time the conservancy was looking to place a bicycle business on the RiverWalk. The conservancy leased space to Wheelhouse at the foot of Riopelle Street, and the business took off.

While Wheelhouse Detroit is not, strictly speaking, a business that depends on the river, its riverside location allows visitors to rent a bike and cruise along the water, taking in the view.

Bicycle sales and service make up the bulk of Wheelhouse’s business, she said, followed by tours and rentals.

Wheelhouse does about three tours a week, guiding riders to places such as Belle Isle, Indian Village and Southwest Detroit. One nice thing about Detroit is that its infrastructure was built for a much larger population, making for nice, wide, open streets for biking now.

“Detroit’s a city well-suited to tour by bike,” Kavanaugh said.