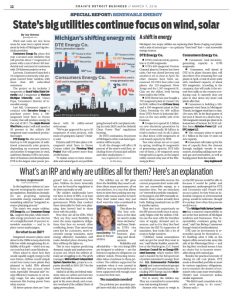 In the legislative debate in Lansing over revamping the state’s energy regulations, Republican lawmakers are proposing replacing renewable energy mandates with something called an “integrated resource planning process.”

So what’s an IRP? Integrated resource plans came about in the 1980s to keep electricity bills low while strengthening the reliability of the grid — which is to say, cut costs but don’t cause blackouts.

Integrated resource plans came about in the 1980s to keep electricity bills low while strengthening the reliability of the grid — which is to say, cut costs but don’t cause blackouts.

When asked to show how they would capably supply energy in the near future, utilities would simply count how many more plants they planned to build. IRPs allowed them to take into account other tools, especially “demand-side” energy-efficiency measures to cut energy usage, but also supply-side measures like buying power from other sources.

All these options then are “integrated” into an overall resource plan. Utilities do them internally but can be forced by regulation to do them externally as well.

The utilities traditionally have not been in favor of IRPs, or at least not when they’re imposed by the government. While they conduct these internally for their own planning, they haven’t had to share them with the public.

Now they are all for IRPs. Why? They say they need flexibility to meet the many regulatory obligations they face on several, often conflicting, fronts: They must keep rates low for customers, meet renewable energy mandates, meet energy efficiency mandates, and make detailed plans showing how they will keep the lights on.

This in turn requires predicting demand, supply and markets several years out, which the utilities already are struggling to do. The grid’s manager, Midcontinent Independent System Operator Inc., projects a capacity shortfall in 2016-2017 for the Lower Peninsula.

Added to all this are federal emissions rules on carbon and mercury, which only will become more stringent in the years ahead, and a massive overhaul of the utilities’ fleets of aging power plants.

The utilities say an IRP gives them the flexibility they need to address these many pressures, all on one platform, in a way that allows them to show how pushing one regulatory side causes another to bend. They don’t mind rules; they just don’t want the rules considered in isolation.

This allows for “the best solutions at the time we need to make those decisions,” said Irene Dimitry, DTE’s vice president of business planning and development.

Reliability and affordability — the very things IRPs are designed to address — are the foremost regulatory obligations on utilities’ minds. Promoting renewables takes a backseat to these priorities. The utilities supported the mandate when it was created in 2008 but now say renewables have been supported well enough since to stand on their own.

The problem pro-mandate people have with this is that while IRPs can include renewable sources, the current proposals don’t make utilities use renewable energy, as a mandate does. Nor are mandates (or “renewable portfolio standards,” in the jargon) and IRPs mutually exclusive. Many states actually have both. Baking standards into an IRP is another option.

They also look suspiciously on the IRP process itself, since it necessarily begins with the utilities. Utilities are the ones with the frontline view of supply, demand and resources, and so it is they that feed data into the IRP. To supporters of mandates, that looks like a lot of room to fudge numbers.

“(Utilities) tweak assumptions and can get the result they want to see,” said Martin Kushler, senior fellow at the Washington, D.C.-based American Council for an Energy-Efficient Economy, which studies IRPs and is funded by the full spectrum of parties interested in energy, from the U.S. Environmental Protection Agency and conservationist groups to utilities and manufacturers, including DTE Energy and the Michigan Environmental Council.

Not to worry, the utilities say. They are committed to renewables now and moving forward.

Anyone who wants to weigh in on the IRP process would be able to because it would be public and transparent, spokespeople for DTE and Consumers said. People with an ax to grind, be they from an industrial company or environmental group, would be welcome, though it’s unclear how often this process would occur.

DTE says its investments in renewables speak for themselves — it’s building what it bills as the largest utility-owned solar array this side of the Mississippi River — and the big fleet overhaul means it has no choice but to increase renewables along with natural gas.

Besides the practical necessity of closing its old coal plants, DTE needs a diversified portfolio to meet its various regulatory obligations, not to mention the desires of customers who want more renewables, Dimitry said. Consumers makes similar arguments.

“We didn’t need a mandate to decide we’re going to do more,” Dimitry said.